Central Banks Won’t Be Able To Halt This Economic Collapse

In 2008, the world experienced the worst economic collapse in 80+ years. This collapse triggered a stock market crash that erased $30 trillion in wealth.

Since that time, collectively Central Banks have cut interest rates over 600 times and have printed over $15 trillion in new money… money that has failed to generate sustained economic growth… money that has set the stage for another stock market crash.

Consider the measures of GDP growth in the US for instance.

The mainstream media likes to present the “official” GDP numbers as though they are gospel… but the reality is that the number you hear in the press is not even close to accurate.

One of the simplest means of hiding the real economic collapse is to use a bogus measure for inflation. If GDP growth is 10%, and inflation is 10%, then real GDP growth is 0%.

Boom! You can promote GDP growth of 4% to support your claim that printing trillions of dollars has boosted the economy.

To remove this accounting gimmick, you can use Nominal GDP and look at the rate of growth from a year ago. Doing this presents a VERY different view of the economy: one of economic collapse, not growth. I’ve circled periods in which the current level of “growth” occured in the past. 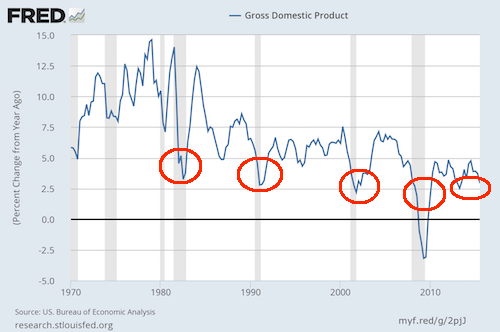 As you can see, the “recovery” of the last six years has largely involved a “growth” rate that was closely associated with recessions over the last 30 years. At best the US economy has been flatlining. At worst we’ve had bouts of economic collapse comparable to a recession.

Also, note that the previous periods in which we’ve experienced this rate of economic collapse have been associated with stock market crashes. 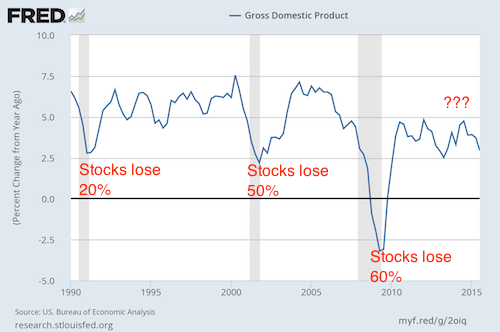 The media can try to hide reality all it wants. But an economic collapse is here. It will trigger another stock market crash just as it did in the early ’90s, the Tech Bubble, and the Housing Bubble. And this time Central Banks won’t be able to stop it: they’ve used up all of their ammo in the last six years trying to create recovery.