China’s Currency: Is The Time Ripe For A New Global Reserve Currency?

China’s push for the adoption of a super-sovereign reserve currency points to a possible larger role for IMF’s Special Drawing Rights (SDR).

The current international monetary system is a historical exception. It has no anchor, such as the silver standard, the gold standard, or the Bretton Woods agreement.

Instead, a floating currency – the US dollar – accounts for the greatest share of foreign exchange reserves, amounting to more than $3.8 trillion, or 64% of allocated reserves (see chart below). Significant currency debasement by the Fed, and increasing prominence of other large economies, such as China, has raised questions in recent years about the justification of King Dollar’s rule.

Not All Sunshine and Roses

Being the supplier of the global reserve currency is not necessarily an enviable position. There is a fundamental tension between short-term national and long-term global monetary policy, known as the Triffin Dilemma. This paradox arises when the United States runs a trade deficit in order to provide the extra dollar-denominated liquidity demanded by foreign states and entities, which in turn results in higher consumption for American consumers.

In the long term, however, persistent trade deficits result in declining value and credibility of the reserve currency, making it less attractive as a store of value.

In an appeal published in the Bank of International Settlements Review in the wake of the financial crisis, the Governor of the People’s Bank of China, Zhou Xiaochuan, called for SDR to play a greater role, as “it has the features and potential to act as a super-sovereign reserve currency”. These features include being disconnected from economic conditions and the sovereign interests of a single country, so as to better accommodate the needs of the global economy.

At a time when multilateral currency debasement is turning into futile beggar-thy-neighbour strategies, a reserve currency issued by an international body could offer the potential of eliminating the inherent risks of credit-based sovereign currency and managing global liquidity. SDR have already played an important role in supplying liquidity following the crisis, as the IMF increased holdings by an order of magnitude to SDR 204bn in 2009.

The SDR is not a currency, per se. Instead, SDR constitute potential claims on freely usable currencies of IMF member states, and serve as unit of account in the IMF.

Currently, only governments and some international institutions can trade SDR, but the scope could be expanded to involve a public settlement system, and facilitate free exchange.

Chinese intentions have become even more outspoken recently, as the PBOC is engaged in talks with the IMF around including the yuan in the SDR.

At present, the value of SDR is a basket of US dollars (41.9%), Euros (37.4%), Pound sterling (11.3%) and Japanese yen (9.4%). The weights assigned to each currency in the SDR are adjusted to take into account their prominence in terms of international trade and national foreign exchange reserves.

The push from PBOC coincides with the IMF’s twice-a-decade review of the basket of currencies that constitute the SDR, which is to be undertaken in late 2015. If Chinese wishes are heeded, the yuan might feature in the new valuation of the SDR. Yi Gang, vice governor of the People’s Bank of China, exemplifies China’s position in stating that:

“We hope the IMF can fully take into account the progress of RMB internationalization, to include RMB into the basket underlining the SDR in the foreseeable, near future.”

Bolstering the yuan’s standing as a reserve currency is part of a broader capital market reform in China, which involves further “easing […] controls over deposit rates, reform of the initial public offering system, and development of a multi-layer capital market”. Assigning a weight to the yuan would also amount to an endorsement of renminbi as a reserve currency to be held by other nations as well, and further serve to diminish US dollar dominance.

Perhaps this is timely, seeing as the yuan entered the top five of trade-finance currencies in 2014, according to global transaction services organisation, SWIFT, as shown in the graphic. 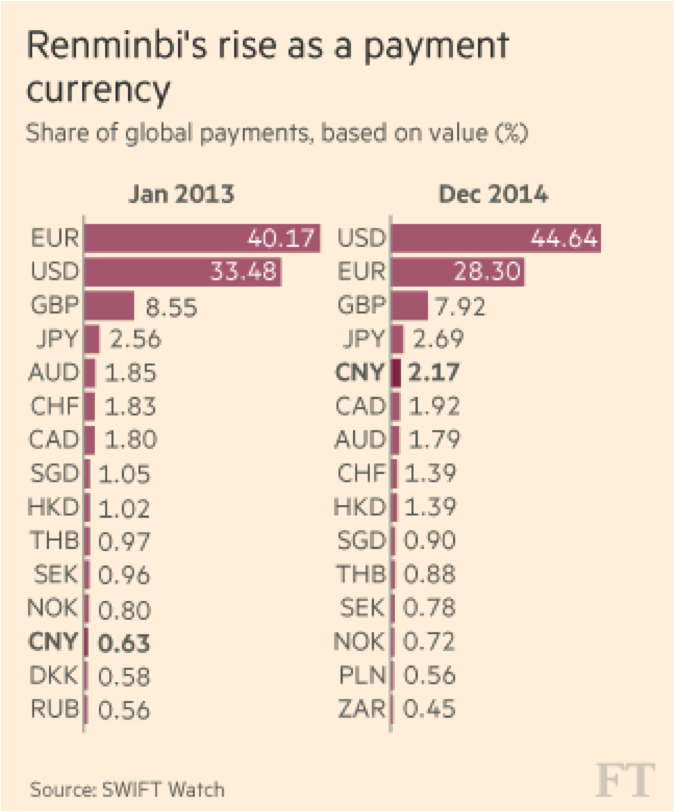 If SDR are going to be taken seriously as a reserve currency candidate, its scope needs to be much broader than it is. This includes permitting non-sovereign and non-institutional holders of SDR, promoting the use of SDR in international trade and commodities pricing, introducing SDR-denominated securities, and widening the range of currencies (possibly even factoring in GDP or other relevant measures) in the basket used to for valuation.

Furthermore, backing SDR with a reserve pool of real assets, rather than just potential claims on currencies, might be necessary for credibility. Ideally, SDR could then provide the backbone of more stable, less crisis-prone global finances.

Mikala Sorensen is an Economist with regional expertise in Europe. She holds a first class honours degree in Philosophy, Politics and Economics from the University of York and is currently pursuing an MSc in Economics at the University of Copenhagen.

« Still A Long Way To Go For China’s “New Normal”
Why The BRICS Summit Has Been Virtually Blacked Out From U.S. Media: Putin Is Leading The BRICS Uprising »