Financing Peace: The Colombian Economy After The FARC

While the historic agreement in Colombia will open the doors to long-term economic development, the political environment will pose key challenges to the administration.

The message Colombian President Juan Manuel Santos conveyed at the United Nations Plenary Session was clear: peace will yield social and economic dividends. This comes days after sealing an unprecedented settlement with the Revolutionary Armed Forces of Colombia (FARC) aimed at ending the five-decades-old conflict by March 23, 2016.

Estimates have predicted that the cost of a successfully-implemented demobilization process will be around USD 45 Billion. Not a cheap endeavor, considering that such cost is equivalent to 15% of Colombia’s current GDP, or the totality of its Central Bank reserves.

Affording peace will undoubtedly be a financial challenge. In 2014, the government ran a 2.1% deficit (a gap of some USD 5.1 Billion), thus experiencing a “twin-deficit” from its fiscal and trade balances.

Adding to that, the external conditions are not aiding the economic situation. Expectations of a raise in US interest rates and plunging commodity prices (coffee by 31.2%, coal 32.6%, nickel 43% and gold by 16.2%) prompted a drastic devaluation of Colombia’s currency by nearly 60% over the last year.

However, if successful, the prospects following an agreement would be truly promising. Peace dividends could pay off the short-term losses in the longer run by progressively reducing costs related to the security and logistical risks of business operations in Colombia.

The Down Side: Tougher Fiscal Discipline and Increased Regulatory Risks

Unable to finance the peace endeavor by itself, Colombia will necessarily have to appeal to international financial institutions.

Colombia’s debt-to-GDP ratio is nearing the 40% mark and the government has been accessing credits at a meager 4% interest rate. Although the President of the World Bank and the head of the IMF recently expressed their support for the peace efforts, some degree of budget restructuring seems inevitable.

Colombia’s economy might experience a necessary deceleration, a required maneuver prior to changing course from a scheme of civil war to one of peace building.

This could initially entail a slight contraction in its GDP due the enormous financial effort committed to disarming, demobilizing, and reintegrating some 8,000 insurgents, on top of the distribution of funds to compensate victims and families.

Thus far, nearly 1.2% of the GDP – around USD 3.5 Billion – is spent yearly on victims, while the total reparation costs could sum up a figure in excess of USD 30 Billion over ten years.

Colombia may have to undertake important financial re-engineering to meet fiscal targets requested as conditions for credit. Consequently, regulatory risks will emerge, as the government may attempt filling the fiscal gap with austerity measures and new means of taxations starting in 2016.

In 2014, Bogota introduced a wealth tax for the richest 1% of Colombians, looking to finance the peace process ahead of the curve. Extractive industries could be the next in line. While a more peaceful context could alleviate the security and integrity costs, regulatory risks will increasingly become the heavier of the burdens to bear.

After resolving security issues, the government may increasingly raise the bar in terms of environmental, labor, and fiscal standards.

Although the peace building process in Colombia will entail considerable financial and economic efforts, it is unlikely to yield clear benefits before three or four years following the accords.

The Bright Side: Peace Dividends

To better understand the potential that Colombia has yet to unlock, we could look at the effects of the conflict on the economy by contrasting real figures with estimates under peace scenarios. 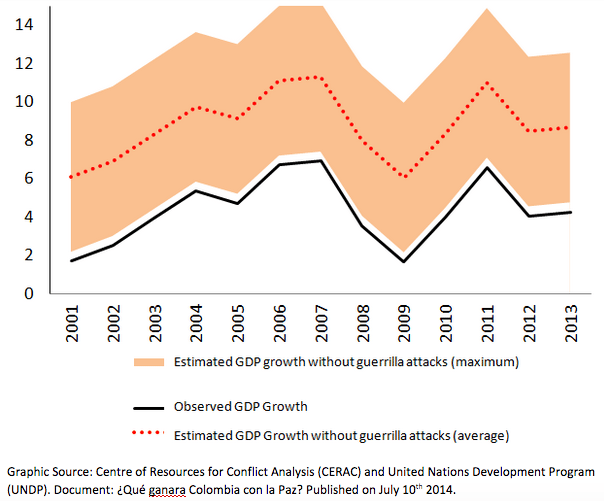 Without the underlying conflict, a CERAC study reveals, Colombia’s economy could have been 15% to 20% richer than it is today. Colombia could have experienced an average growth of nearly double its current levels, from 4.3% to 8.7% of GDP a year.

While counterfactual, that potential is still present. Finance Minister Mauricio Cardenas has stated in this regard that “Colombia can be a country easily growing at between 6% and 7% per year after a peace agreement has been sealed.”

If the homicide rate in and attack frequency in the country were reduced by 50%, the GDP growth could accelerate by an additional 1% per year. Such estimates are consistent with the 2% of GDP-a-year reduction of average growth from 1980 to 2005, which was known as the most violent period in the history of the conflict.

Peace dividends will materialize following the decline of clashes and illicit activities.

While estimates widely differ, ranging from 0.3% to 4.4% of GDP growth a year, the general consensus places growth prospects at around 1.5% to 2% of GDP annually, a realistic expectation considering the 2% growth that Peru and the Philippines experienced after striking a peace deal.

One of the first and most noticeable effects on the state’s finances would be the reduction on defense spending, which is the highest of the region at 3.4% of GDP (some USD 12 Billion according to SIPRI).

Peace prospects could progressively reduce security costs by 1% or 2%, especially when referencing the cases of some Caribbean post-conflict nations, such as Guatemala, El Salvador, and Honduras, which currently spend only 1.3% of GDP on defense.

Environmental damages could be drastically reduced as well, since attacks and sabotages to energy infrastructure have been the preferred target of FARC attacks.

In 2014, over USD 500 million were lost in oil revenues due to attacks on energy infrastructure by the insurgency. The Colombian Oil Association estimated that some 4.1 million oil barrels were spilled over the last three decades.

Energy is not the only sector that will perceive strong peace dividends. Mining and farming too would likely experience similar effects.

As for today, nearly 80% of Colombian gold comes from Illegal mining. Over the last five years, 2,781 illegal mines have been detected, representing over USD 2.5 billion of the estimated revenues of the sector. This would likely change following peace accords.

While farming has been impeded from reaching its full potential by the security context, a peace agreement could allow Colombia to become an agricultural power.

Coca plantations have taken over the best-suited lands for cultivation, which have suffered from both the airborne glyphosate fumigation of government’s forces  and as well as a network of landmines installed by the insurgencies.

Getting rid of air fumigation efforts and demining the territory, which would likely cost around USD 200 million, would allow the Colombian agricultural sector to recover some 800,000 hectares of farmable lands.

Putting an end to the longest conflict in the western hemisphere may well prove to be complex. Yet, peace dividends may soon demonstrate the economic worth of a safer country.

Martin F. De Angelis is a political and security risks analyst with a focus on Latin America. He has lived and worked in the US, UK and Cuba. He is a former US DoS Fulbright Scholar and UK FCO Chevening Fellow. Martin has been broadcast by BBC, Al Jazeera, SkyNewsHD, Euronews and other media. He holds a Licentiate degree in Political Science from the University of Buenos Aires, an MA in Strategy and Geopolitics from the Army War College of Argentina and an MSc in International Relations Theory by the London School of Economics [LSE] with Merits.

One thought on “Financing Peace: The Colombian Economy After The FARC”