With apologies to Freddy Mercury and Queen, it looks like another one has just bit the dust.

You can now add the Japanese central bank to the list of banks that have ventured deep into negative interest rate territory with the sale of a negative rate bond. 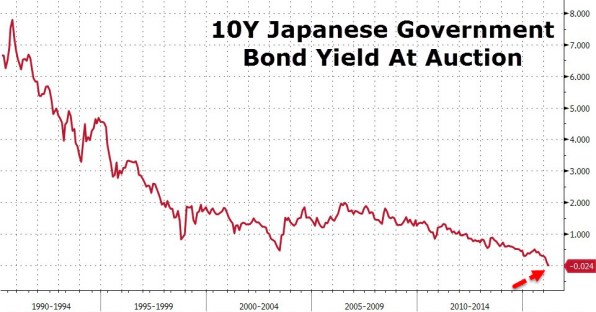 The Swiss are already languishing in that territory with negative rates out on their 20 year bond – if you can believe it. Steve Barrow, a G10 strategist at Standard Bank tells us that there will be others soon enough. He contends that, “Germany will get there as well, and yields will continue falling, going negative where they aren’t negative.”

Negative rates aren’t just the latest strategy to stimulate growth being pulled out of central bankers’ toolboxes. They are the end-game of the international monetary system as it effectively destroys capital.

And negative interest rates are a clear signal that collapse is not only coming, it is imminent.

The gold and libertarian community likes to fixate on inflation as though that’s the key indicator of impending collapse. It is not. Inflation can be affected by a myriad of things – including economic downturn. Just because a hyperinflation isn’t happening doesn’t mean the system isn’t foundering and inching towards destruction. Interest rates are actually a better indicator of this.

You’d like to think that the US Federal Reserve is immune to such influences—except they just tried to raise rates in December, and yields still went down afterwards. In other words, the Fed is not in control. No central bank is.

US interest rates have now been pathologically falling for over three decades and we are past the point of no return.

Be prepared for the worst.

« This 4,000-Year Old Financial Indicator Says That A Major Crisis Is Looming
The Gold Bull Market Is Back… Will It Last? »

One thought on “Negative Interest Rates A Sign Of Imminent Collapse”