The Central Bank of Egypt auctioned $200 million at 8.85 per Egyptian pound rather than the prevailing 7.73. The inflationary move of devaluation is intended to help the country gain a more solid financial background due to a persisting “dollar shortage” that nobody seems to hold in much curiosity. Despite the fact that this is a widespread and growing problem, no matter where it occurs there is no rush to explain it outside of cursory platitudes. It is just taken as a given, mostly blamed on oil prices or some other bland geopolitical idiosyncrasy.

Tourism and foreign investments, key sources of hard currency for the import-dependent economy, have yet to pick up after the uprising in 2011 due to political unrest. A string of recent terror attacks has further weighed on sentiment. Egypt’s foreign reserves have fallen by more than half since early 2011 to about $16.5 billion at the end of February.

All of that sounds entirely plausible, but it does not account for why, all of a sudden, Egypt is so acutely short of “dollars” right now. About a week ago, the Egyptian central bank eased restrictions that limited currency deposits and withdrawals for individuals, keeping in place caps for corporate entities.

Egypt, which relies heavily on imports, has been wrestling with a currency crisis and struggling to revive its economy since a 2011 uprising drove away foreign investors and tourists, both major sources of hard currency.
Reserves have tumbled from $36 billion in 2011 to $16.5 billion at the end of February and the central bank has been rationing dollars through weekly auctions…
The central bank had taken several measures to relieve the dollar shortage in the banking system that had affected both importers and exporters who have been unable to pay for goods and raw materials.
In January it raised the deposit limit for importers of some essential goods to $250,000 a month to relieve a dollar shortage that had resulted in goods piling up at ports.
With that move, importers were able to deposit dollars obtained from the black market in order to pay for their goods.

This all raises several issues which none of the articles reporting on them ever address. First is the black market price of the Egyptian pound which has stretched all the way to nearly 10.00. The recent devaluation only bows to that reality, as an “overvalued” currency will manifest only in increasing pressure (Argentina, Venezuela). What isn’t described is why the currency is overvalued in the first place.

To undertake painful devaluation adjustments to rectify that imbalance means internal inflation, at best. That suggests why central banks are reluctant to engage in that manner but again does not present the reason for the imbalance. It is often left to “oil prices” or, in Egypt’s case, geopolitics, but that is far from a direct correlation. As the quote immediately above suggests, Egypt’s reserves have been falling severely since 2011 and Mubarak’s ouster, but that description is misleading.

Official Egyptian “reserves” did collapse and by the amounts suggested, but the collapse was all contained in 2011 and 2012; since then, reported “reserves” have been remarkably stable except for a couple discrepancies. 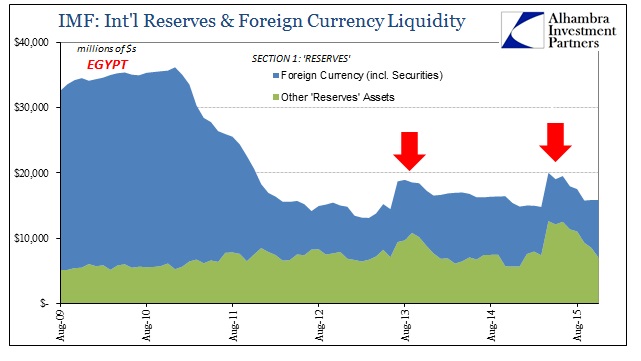 In fact, total “reserves” as of the latest IMF update (November 2015) were more than slightly higher than in the middle of 2012 at the end of the “geopolitical” slide and early 2013 at the start of something more fundamental in global finance. I have highlighted the two “discrepancies” on the chart above as they correspond to something the Egyptian central bank has done but isn’t clear as to what exactly that was.

The IMF call sheets are broken down by segments, which really means that “reserves” aren’t piles of cash nor necessarily even bank deposit balances and that there is usually a lot more going on than these mainstream reports suggest. The overall reserve structure is reported in Section I. In Egypt’s case, a significant portion of their total “reserves” are due to “Other reserve assets”, specifically the “Other” line item of Other reserve assets – literally, then, unclassified in type as well as category. In the two periods I have highlighted above, the amount on this non-specific line is disproportionately large.

For example, in April 2015 headline reported Egyptian reserves jumped from $14.8 billion to $20 billion. Of that $5.216 billion increase, $5.181 billion was due to “Other reserve assets; Other.” The proportion of total Egyptian “reserves” coming from this unspecified asset was 22.7% last April but an enormous 43% the very next month. Again, “reserves” are often nothing like that term.

There aren’t many clues as to what this balance might include, but there is one memorandum reference. In fact, it is more than a reference since the same exact balance in “Other reserve assets; Other” appears again in Section IV with all the more interesting memorandum items that typically populate other country’s reports (Brazil, most notably). Classified as “securities lent and on repo”, an equal balance shows up where it is described not to be included. These are securities but not securities in the manner by which they could be defined as “reserves” under Section 1; forcing them instead into “Other reserve assets; Other.” 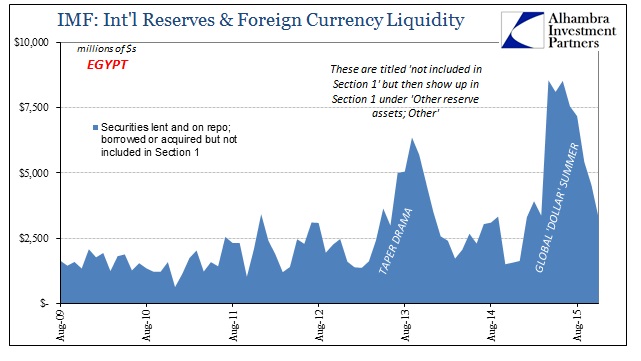 What that suggests is that these are assets, almost assuredly all dollar-denominated, in some form of repo arrangement, meaning the central bank actively involved in managing the availability of “dollars” for its steadying supply auctions. The exact nature of these repo transactions is unknown, but the timing of the two surges is revealing; the first comes during the currency turmoil of 2013 (which had nothing yet to do with oil prices) and then again into the global “dollar” waves that would manifest last summer.

In other words, here we have the Egyptian central bank engaging in huge repos during some of the worst global “dollar” conditions which, at least in terms of last year, captured direct internal “dollar” rationing. That is not a fundamental, economic problem so much as a purely financial, “money supply” issue that becomes the cause for fundamental, economic problems. We keep hearing about a dollar shortage that is described in terms of local shortages but finding them instead widespread and systemic. As Egypt, the timing of these deeper funding maneuvers suggests quite the opposite, with local troubleshooting inside first a systemic “money supply” problem.

It is so obvious that you would think that economists would be all over it; contraction in money supply, building deflation (not the good kind) and the synchronizing universal downbeat of the global economy is pretty much what monetarism was made for going back to Milton Friedman. But monetarism is really a political animal, leaving behind purely financial and economic tasks almost as soon as it assumed credibility and power. It has been corrupted into control and management, a soft version of central planning. To admit the eurodollar as money would be to completely upend all theories that allow(ed) Janet Yellen or Ben Bernanke to assert control. Control is predicated upon precision (quantity most of all; as in the “Q” of QE) of not just correlations but basic measurement. You can’t stake a claim to monetary control of the economy if you are forced to admit you can’t even define let alone measure money.

So instead the mainstream describes a dollar shortage as if it weren’t actually a dollar shortage. To them, it can’t be that because the Fed expanded its balance sheet to more than $4 trillion, with total bank “reserves” still an astounding $2.5 trillion. Yet, for all that “money” the number of locations suggesting increasingly desperate “dollar” conditions only increases. It’s not always oil-related countries, either, which makes this all the more compelling as a systemic factor – from Brazil to Argentina and really China. Egypt is a significant oil producer (2nd largest non-OPEC nation in Africa), but oil isn’t the primary factor. It is, however, dependent on “dollars” not in circulation but in financing its currency deficit.

With nearly 90 million people, the Arab world’s most populous nation procures about 10 million tons of wheat a year to meet domestic needs for subsidized bread, making it the largest buyer of the grain globally. The cheap-bread program, for which around three-quarters of Egyptians qualify, has been in place for more than 50 years, but the cash crunch and a deficit are pushing the government to reassess the allowance.
The dollar shortage is affecting Egypt’s businesses as well. For the first time in four decades, Egypt’s largest assembler and distributor of passenger vehicles halted production at some of its plants as the dollar shortage limited its imports.
A nearly three-week suspension of its assembly units in September and October cost GB Auto SAE at least 20% of its quarterly sales, said Menatalla Sadek, the company’s chief investment officer. “We just didn’t have access to the dollars we needed to buy vital parts to keep the units running,” she said.

Egypt has a dollar problem, but it is not Egypt’s.

« Russia And China Continue To Forge Energy Ties
Is Saudi Arabia Running Out Of Gas? »