With the formation of the Nigerian government still underway, uncertainty over reforms in the oil industry and macroeconomic mismanagement are making investors increasingly weary amid significant capital outflows and falling levels of FDI.

More than four months after his inauguration in late May 2015, President Muhammadu Buhari finally submitted his list of ministerial nominees on 30 September. Currently undergoing a vetting process by the Senate, candidates are yet to be assigned their cabinet portfolios, but Buhari has already appointed himself minister of the most lucrative, opaque, and corrupt ministry of all: petroleum resources.

Although this could prove to be a positive step following Buhari’s recent overhaul of the state-owned Nigerian National Petroleum Corporation (NNPC), much is yet to be done to address pending corruption probes and reform of a sector that constitutes about 11% of GDP, 94% of export revenues, and 70% of government income.

Tackling the prevalence of oil theft and insecurity in the Niger Delta, as well as the approval of the Petroleum Industry Bill (PIB) that has been stuck in parliament since 2009, will be crucial for the recovery of a sector that is proving to be a strain on the Nigerian economy.

In the absence of an economic policy team, investors are becoming increasingly weary of Abuja’s ability to address downside risks.

Although Buhari is implementing encouraging reforms in the oil sector at a time when the non-oil sectors are gaining ground, investor confidence may plummet further if the government continues to drag its feet.

Although decreasing, the weight of oil on the Nigerian economy is still too important to be neglected.

The previous administration proved to lack the necessary resolve to address the two most important phenomena affecting crude production and revenue: oil theft and misappropriation of funds.

For years, and particularly during the Jonathan administration, oil has been stolen from export terminals, pipelines, and tanks – sold thereafter in foreign black markets.

In addition, oil funds have recurrently gone missing, as first evidenced when the former central bank governor Lamido Sanussi denounced $20 billion in misplaced oil receipts from the NNPC, only to be sacked as a result.

To add fuel to the fire, former militant leaders of the Niger Delta have threatened to resume agitation in the country’s oil epicentre at a time when Buhari has terminated the petroleum pipeline protection contracts with companies owned by ex-militants ahead of an imminent expiration of the amnesty program for former insurgents this December.

The politicisation of the oil industry has therefore proven to be a fundamental hindrance to its progression.

The May 2015 post-electoral fuel shortage crisis is nothing but the latest episode shedding light on the negative externalities derived from government malfeasance and an inefficient fuel subsidy system as it was prompted by oil marketers suspending delivery due to $1 billion of outstanding payments by the cash-strapped Jonathan government. 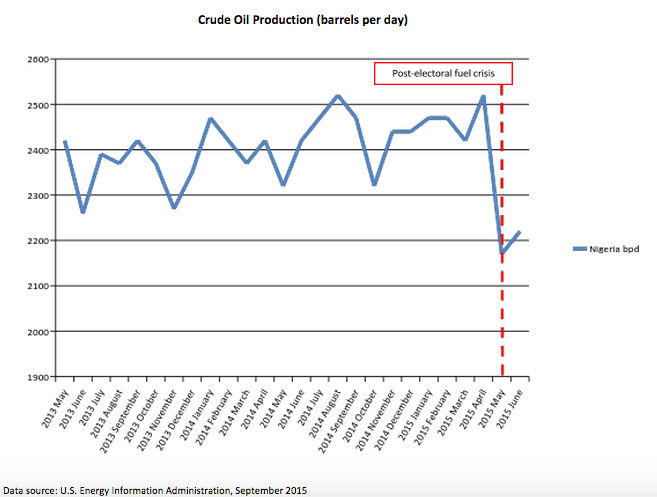 But with the recent arrest of former oil minister Diezani Alison-Madueke in London over charges of bribery and money laundering, Buhari’s pledge to fight corruption seems underway, particularly as legal investigations have seldom been carried out against high-level politicians in the past.

Having revamped the NNPC with a new board and managing director – as well as slicing the state company into smaller divisions for better monitoring – Buhari seems determined to turn the NNPC into a more transparent and accountable entity.

The timing, however, is unfortunate, as the effects of national and global headwinds are already hard-hitting.

With the sharp fall in global crude prices and the China-led emerging markets slowdown, the Nigerian government will struggle to boost revenue.

This comes at a time when GDP growth and FDI are on a downward trend while the current account risks entering negative territory in 2016, driven by a fiscal deficit and tumbling oil revenue. 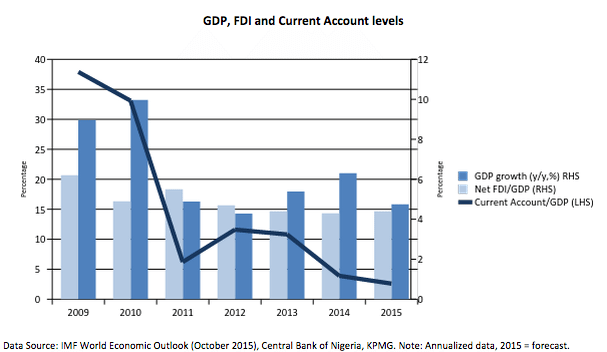 The Central Bank of Nigeria (CBN) has had to devalue the Naira twice within a year amid mounting capital outflows prompted by uncertainties in the lead of the past election.

But the monetary authorities are now struggling to defend the currency with dwindling foreign reserves, exerting upward pressure on inflation.

With the prospects of the Fed raising rates soon, borrowing costs on international capital markets are no longer as favourable as during Africa’s recent “Eurobond rush.”

With weakening fiscal and external balances, Nigeria will have to pay a premium for international debt issuance as investors become more risk-averse.

Moreover, domestic liquidity continues to tighten, making it harder for SMEs to borrow.

This has been exacerbated by a recent presidential directive requiring all federal revenue-generating institutions to pay their income into a single Treasury account.

Although this measure aims to tackle corruption by avoiding public revenue to be dispersed in untracked private bank accounts, this will essentially dry up liquidity among local banks, pushing bond yields upwards.

As a result, the CBN will have to decide whether to devaluate the Naira again and risk losing control over inflation or to continue its drawdown on foreign reserves and impose capital controls to anchor the exchange rate.

In tandem, the government will have to decide whether to cut back on expenditure in areas that are politically sensitive or continue to borrow more at the cost of piling up its debt bill. Capital expenditure will no doubt be sacrificed at the expense of recurrent expenditure, causing further hindrances to much-needed infrastructural investment.

The uncertainty surrounding Nigeria’s economic policy conundrums, concerns about its foreign exchange liquidity and the CBN’s inaction to calls for currency devaluation and loosening of capital controls prompted JPMorgan to remove Nigeria from its GBI-EM Index, which tracks $2 billion worth of local bonds.

This has exacerbated the outflow of capital as investors become increasingly distrustful of the authorities’ ability to manage the economy.

Granted Buhari’s good intentions to “clean up” the administration before forming his own, the delays that this process has incurred have come at the cost of generating unsettling uncertainty for investors.

For multinational oil corporations (MOCs), the precarious security environment and falling value of the Naira has caused many of them to halt future investments.

With prospects that the PIB will be revised and re-drafted, this will no doubt delay the implementation of a piece of legislation that seeks to establish a new legal framework and regulation mechanism for an industry that has been scarred by commercial-scale theft, sabotage and corruption.

In the absence of the PIB, MOCs will be reticent to bolster their investments while they continue to scale down their operations in an unsafe and uncertain environment.

The recent NNPC announcement to renegotiate production-sharing contracts with MOCs is a reassuring initiative, but oil majors remain skeptical given the Nigerian government’s poor track record to commit to reforms in this sector.

Pending the unveiling of a policy strategy by Buhari’s economic team, Nigeria’s ability to attract investment will continue to fall short of its potential.

Jose Luengo-Cabrera works at the EU Institute for Security Studies. He has previously worked for the European External Action Service, International Crisis Group and the United Nations Department of Peacekeeping Operations. His research focuses on developments across Sub-Saharan Africa, principally on the drivers of political (in)stability and economic growth in West Africa.