The Bond Bubble Is Already Bursting… Here’s How We Know

As we outlined last week, the bursting of the bond bubble has begun.

CNBC and the financial media may spend 99% of their time talking about stocks, but bonds are the single most important issue for Central Banks.

When you consider everything in the context of the bond bubble, every Central Bank policy begins to make sense.

None of these issues address what created the bond bubble in the first place. So global governments, corporations and others took advantage of low interest rates to issue… more debt.

And the bond bubble just burst.

Today corporates are more leveraged than they were in 2007. Thus, the Bond Bubble not only encapsulates sovereign nations, but even individual companies. And now that bubble is bursting.

Companies have defaulted on $95bn worth of debt so far this year, with 2015 set to finish with the highest number of worldwide defaults since 2009, according to Standard & Poor’s.

The figures are the latest sign financial stress is beginning to rise for corporate borrowers, led by US oil and gas companies. The rising tide of defaults comes as investors reassess their exposure to companies that borrowed heavily in recent years against the backdrop of central bank policy suppressing interest rates…

Based on the number of defaults in the first three quarters of the year, S&P expects 109 defaults by year-end, the largest total since 268 borrowers ran into problems in 2009. There were only 60 defaults worldwide in 2014.

The first sector to go belly up was energy, due to the collapse in oil prices started mid-2014.

However, as the below chart shows, this is much more than an Energy bust: 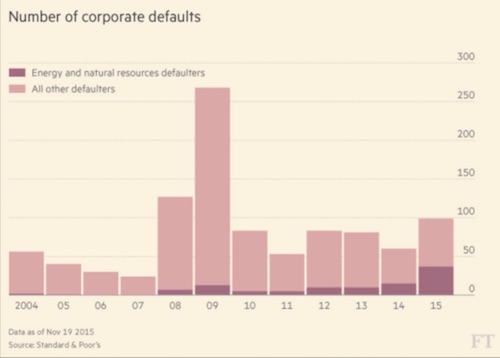 This wave of defaults be increasing as the global economy weakens. Year over Year corporate sales growth is already flatlining and trending down.

Energy is the worst performer from a sales perspective, but it is hardly alone. Materials, Industrials, Technology, and Utilities are all posting negative growth resulting in overall negative sales growth for the S&P 500. And we’ve reached the point that even financial engineering via buybacks is failing to mask the fact that profits are falling: 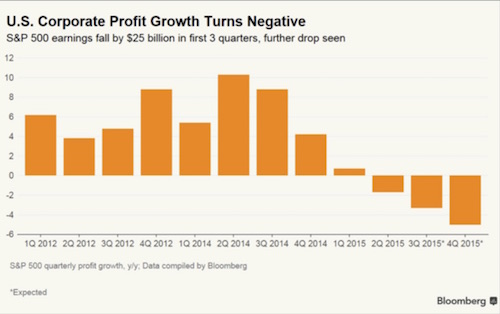 As a result of this, money is flowing out of corporate bonds, particularly junk bonds. Last year (2015) was the first year since 2009 that Junk Bonds finished DOWN for the year.

That bubble has now clearly burst. 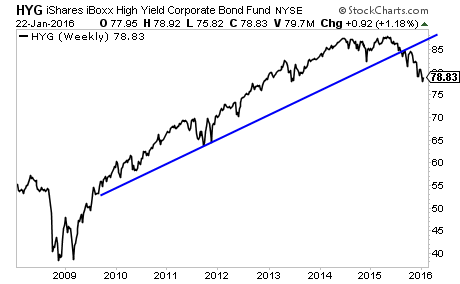 This is just the beginning. The bond bubble will take months to completely implode. And eventually it will consume even sovereign nation.