Three Goals The Thai Junta Hopes To Achieve Before It Exits

The Thai junta government is prolonging its stay. The new draft constitution empowers the military at the expense of weakening the executive branch and political parties. In the main time, growth in the long term looks gloomy.

After the 2014 bloodless military coup, the self-appointed Thai military government has been in power for almost two years, and repeatedly delaying elections, first set for 2015, then for 2016. Now it seems no elections will take place until 2017.

The junta government has confirmed that elections will be held in 2017, regardless of the referendum’s outcome. But it’s not clear what would happen if the draft is rejected. The junta could pick one of the previous 19 constitutions, or let the interim constitution remain in place, which essentially grants the junta government near absolute power.

The junta has overstayed its welcome, but they are unwilling to make an exit until they have achieved three objectives.

The single-ballot electoral system is an attempt to change the rules of political games. Against this backdrop is a decade long national division and political struggle between military-backed royalist elite against rural-based parties linked to the business tycoon Thaksin Shinawatra. Thaksin-led or Thaksin-affiliated political parties have managed to win every single election in the last decade, despite military or judicial intervention, thanks to the strong north and northeast rural population.

Thaksin won the 2001 election and was ousted by the military in 2006 and Thai’s highest court has ruled him guilty for corruption and abuse of power. Thaksin’s allies Samak Sundaravej won the post-coup elections in 2007, and Thaksin’s sister Yingluck took the top post in 2011. This prompted the military to adopt a new constitution to change the electoral system that would prevent any political parties from forming a majority in the parliament.

The new draft proposed a mixed-member proportional representation system (MMP), a single-ballot system with one vote to choose constituency MPs, and votes for losing candidates will be used to calculate the party-list seats. In essence the more constituency MPs a party gains from the 350 constituency seats, the less party-list MPs it will get.

This system would benefit small and medium political parties and force a multi-party system, a type of coalition government that featured in Thai politics in the 1980s and 1990s. Not only would the new electoral system prevent the Shinawatra family from gaining a majority in the parliament, it would also weaken elected government.

Objective 2: Empower the Military at the Expense of Elected Institutions

The military government is also trying to make the armed forces stronger, with attempts to reduce the power of elected government, and to make intervention by unelected institutions, notably the Constitutional Court, easier.

The CDC draft would allow a non-elected prime minister to oversee the government if the new proposal is passed. Political parties would be asked to submit a list of three candidates for the highest post, but it is unclear how the PM would be selected after the election.

While the changes would allow more transparency in the choices of candidates, the draft also leaves the option open for people outside of the parliament to run for prime minister. The junta could well be one of the candidates.

This is a step backwards of Thailand’s years democratic transition, and also creates political instability and crises with a prime minister that might not have any links to the people. The last time Thailand had an un-elected prime minister, it led to a series of anti-government protests that eventually turned violent and killed over 50 lives in May 1992.

In addition, the draft also grants the Constitutional Court the rights to decide whether a government can pass an emergency decree, a power that lies within the executive branch in a liberal democracy.

Objective 3: Settle the Question of the Royal Succession

The ever deteriorating health of the beloved Thai king adds more uncertainty to the political landscape of Thailand. The world’s longest-serving monarch enjoys huge popularity in the country and is the only the person that is able to unify the national division between the royalist elites and the rural population. When he passes away, the military is looking to fill the power vacuum with the succession of a less popular king.

However, a power struggle between competing camps of the armed forces and their respective support of competing heirs to the throne is emerging. The intra-military conflict is the division between the Queen’s Guard regiment, which supports the Crown Prince Maha Vajiralongkorn, while other influential royalists and the King’s Guard soldiers prefer the King’s second daughter, Princess Maha Chakri Sirindhorn.

It is now widely believed that the military is here to stay at least until the royal succession takes place. The junta will likely to invoke martial law to extend the national mourning period for at least one year and condemn anyone calling for elections. Elections will not be held and the military will not handover the power to a civilian government until they consider the succession settled.

Growth Prospects for the Next Three Years

According to the above timeframe (the “6-4-6-4 roadmap to democracy” and a possible one year national mourning period) the junta will remain in office at least well into 2017, and increasingly likely into 2018.

While the armed forces have restored stability after the mass demonstrations between 2013 and 2014 that lasted for six months, they are less capable of tackling economic issues. 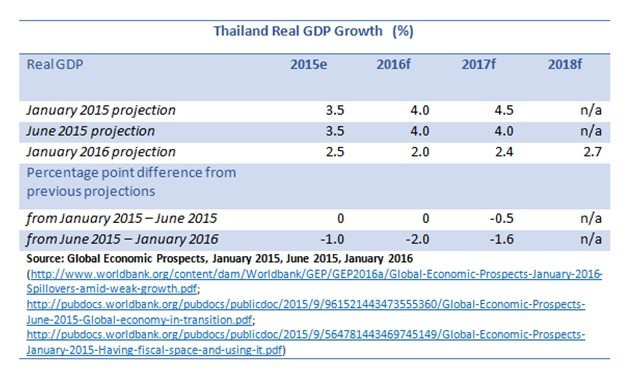 Recovery in Thailand was weaker-than-expected, and the World Bank’s January 2016 Global Economic Prospects now expect Thailand to have grown 2.5 percent in 2015. Growth between 2016 and 2018 is forecasted to be between 2.0 to 2.7 percent.

The World Bank attributed the downward adjustment to the political uncertainty and fragile confidence continues to weigh on private investment and consumption growth.