By Contrast, The Chinese Are Skipping Full ‘Stimulus’ No Matter The Inflation Rate

Europe is not the only location seeking out more “inflation”, as almost any central bank around the world except Banco do Brasil would do anything to find it. The ECB provided more emphasis in their panicked escalation today. In China, by contrast, consumer prices moved to +2.3% in February, which was the highest rate since July 2014. Unfortunately, that rise was more so non-economic factors than the expected byproduct of successful monetary integration, as food prices surged 7.3% while non-food “inflation” actually sunk to just +1.0%.

Even the usual sunny disposition from the mainstream was lacking for this CPI report, as surely economists recognize that food inflation appearing now at this weak economic point only increases the negative economic pressure.

China’s consumer inflation accelerated faster-than-expected in February due to rising food prices but another fall in upstream prices is likely to add to concerns about growing deflationary pressures, which could trigger further policy easing.

Economists say the upward trend in CPI is unlikely to sustain. HSBC Chief China Economist Qu Hongbin “attributed the easing contraction to stabilizing commodity prices during the period.” Qu further emphasized that temporary factors and downward pressure (on non-food prices) have predominantly caused the rise in inflation, and their influence remains heavily.

From that there was scant improvement in producer prices which continue to contract at more than 4%. The Chinese PPI was estimated at -4.9% in February, the 13th straight month worse than -4%. The wider, parallel Purchasing Price Index for Industrial Producers was -5.8% in the latest estimate, the 14th consecutive month less than -5%. It isn’t coincidence that negative producer and industrial prices accompany, usually, global recession. 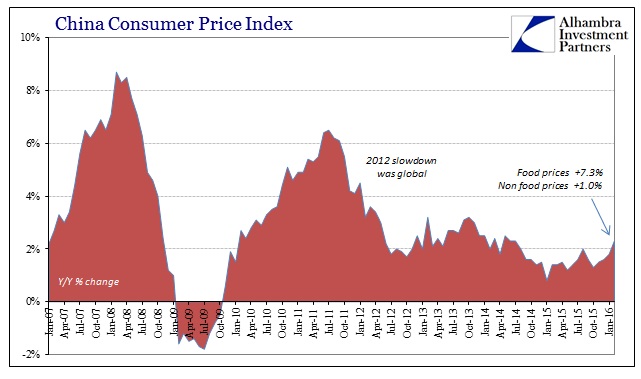 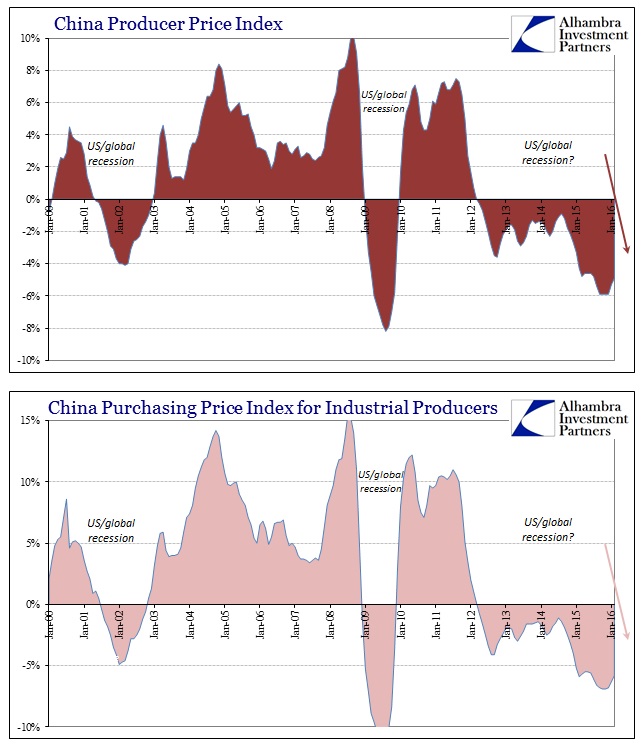 The results leave economists perplexed as to why there isn’t any more “stimulus” forthcoming. The difference between what China is “supposed” to do and what it has done is the same as what has been in place since “reform” was first identified in late 2013/early 2014. In other words, where economists believe that any authority should do anything in its perceived power to boost growth, the Chinese have shown a different understanding about that “growth” as China, and its overcapacity, fit into the global system. As their trade numbers amply confirmed, there is no growth at all, leaving only indications that as bad as it has been there might yet be much worse.

Full-scale “stimulus” was practiced in 2009 and again in 2011-12 to no success. It built only massive financial imbalances without the expected re-attainment of pre-crisis growth trends and factors; especially global trade. There is no use revisiting 2009 because the outlook from that time didn’t survive this very long into this “recovery.” China is left navigating the mess, trying to manage as best it can this structural realignment, including picking out whatever financial and monetary targets from time to time. China’s President reiterated that fact earlier this year in January:

China will face increasing challenges over the next five years for which strong stimulus to boost development is no longer the solution, President Xi Jinping says.
“Risks that arise as a result of the country’s development may continue to accumulate and be consecutively revealed over the next five years,” Xi was on Friday quoted in the Communist Party’s flagship magazine Qiushi Journal as saying.

It’s a startling assessment (for the mainstream) not about China but again the global economy for which China was the eurodollar axis and pivot. This “structural” view was reiterated at last month’s G-20 meeting.

For his part, Chinese Premier Li Keqiang, speaking in a pre-recorded video at the G-20, said quantitative easing policies can’t remove structural obstacles to growth and may lead to negative spillovers. The People’s Bank of China has been using more orthodox tools to support fiscal spending and structural reforms.

China’s struggles are just a reflection of the global economy’s, and Xi Jinping’s statement was an admission that China has given up on the recovery and any vision of restoring prior growth and function – the only true “structural obstacle” is the failure of all prior stimulus to fulfill recovery visions. What is left is for various authorities in China, primarily the PBOC, to try to ensure that the transition to more natural and organic growth is as painless as possible; the events really since last July continue to suggest that painless is impossible, especially since the economic pull of the recovery, insufficient as it was, toward its end appears much larger than anticipated even by those outside the mainstream who some time ago accepted the diagnosis. In short, nobody really knows China’s or the globe’s organic growth baseline involuntarily stripped of decades of monetary and financial over-influence.

Chinese inflation estimates only confirm that ongoing struggle with overcapacity and the financial imbalance that goes along with it. 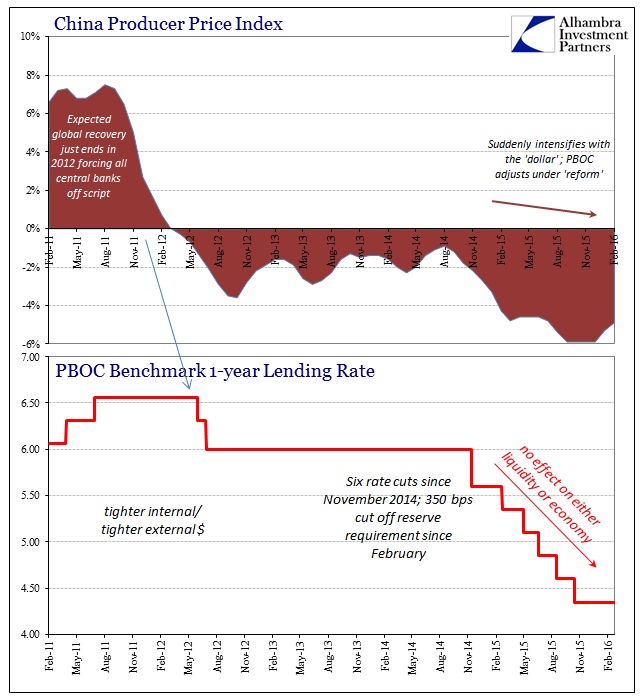