It Is Mathematically Impossible To Pay Off All Of Our Debt

Did you know that if you took every single penny away from everyone in the United States that it still would not be enough to pay off the national debt?

Today, the debt of the federal government exceeds $145,000 per household, and it is getting worse with each passing year.  Many believe that if we paid it off a little bit at a time that we could eventually pay it all off, but as you will see below that isn’t going to work either.  It has been projected that “mandatory” federal spending on programs such as Social Security, Medicaid and Medicare plus interest on the national debt will exceed total federal revenue by the year 2025.  That is before a single dollar is spent on the U.S. military, homeland security, paying federal workers or building any roads and bridges.  So no, we aren’t going to be “paying down” our debt any time in the foreseeable future.  And of course it isn’t just our 18 trillion dollar national debt that we need to be concerned about.  Overall, Americans are a total of 58 trillion dollars in debt.  35 years ago, that number was sitting at just 4.3 trillion dollars.  There is no way in the world that all of that debt can ever be repaid.  The only thing that we can hope for now is for this debt bubble to last for as long as possible before it finally explodes.

It shocks many people to learn that our debt is far larger than the total amount of money in existence.  So let’s take a few moments and go through some of the numbers.

When most people think of “money”, they think of coins, paper money and checking accounts.  All of those are contained in one of the most basic measures of money known as M1.  The following definition of M1 comes from Investopedia…

A measure of the money supply that includes all physical money, such as coins and currency, as well as demand deposits, checking accounts and Negotiable Order of Withdrawal (NOW) accounts. M1 measures the most liquid components of the money supply, as it contains cash and assets that can quickly be converted to currency.

As you can see from the chart below, M1 has really grown in recent years thanks to rampant quantitative easing by the Federal Reserve.  At the moment it is sitting just shy of 3 trillion dollars… 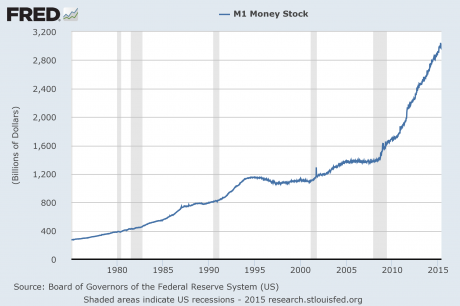 So if you gathered up all coins, all paper currency and all money in everyone’s checking accounts, would that even make much of a dent in our debt?

We’ll have to find more “money” to grab.

M2 is a broader definition of money than M1 is, because it includes more things.  The following definition of M2 comes from Investopedia…

A measure of money supply that includes cash and checking deposits (M1) as well as near money. “Near money” in M2 includes savings deposits, money market mutual funds and other time deposits, which are less liquid and not as suitable as exchange mediums but can be quickly converted into cash or checking deposits.

As you can see from the chart below, M2 is sitting just short of 12 trillion dollars right now… 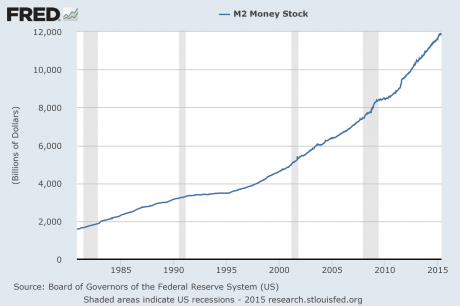 That is a lot more “money”, but it still wouldn’t pay off our national debt, much less our total debt of 58 trillion dollars.

So is there anything else that we could grab?

A measure of money supply that includes M2 as well as large time deposits, institutional money market funds, short-term repurchase agreements and other larger liquid assets. The M3 measurement includes assets that are less liquid than other components of the money supply, and are more closely related to the finances of larger financial institutions and corporations than to those of businesses and individuals. These types of assets are referred to as “near, near money.”

The Federal Reserve no longer provides charts for M3, but according to John Williams of shadowstats.com, M3 is currently sitting somewhere in the neighborhood of 17 trillion dollars.

So even with the broadest possible definition of “money”, we simply cannot come up with enough to pay off the debt of the federal government, much less the rest of our debts.

That is not good news at all.

Alternatively, could we just start spending less than we bring in and start paying down the national debt a little bit at a time?

Perhaps that may have been true at one time, but now we are really up against a wall.  Our rapidly aging population is going to put an enormous amount of stress on our national finances in the years ahead.

According to U.S. Representative Frank Wolf, interest on the national debt plus “mandatory” spending on programs such as Social Security, Medicare and Medicaid will surpass the total amount of federal revenue by the year 2025.  That is before a single penny is spent on homeland security, national defense, paying federal workers, etc.

But even now things are a giant mess.  We are told that “deficits are under control”, but that is a massive hoax that is based on accounting gimmicks.  During fiscal year 2014, the U.S. national debt increased by more than a trillion dollars.  That is not “under control” – that is a raging national crisis.

Many believe that that we could improve the situation by raising taxes.  And yes, a little bit more could probably be squeezed out of us, but the impact on government finances would be negligible.  Since the end of World War II, the amount of tax revenue taken in by the federal government has fluctuated in a range between 15 and 20 percent of GDP no matter what tax rates have been.  I believe that it is possible to get up into the low twenties, but that would also be very damaging to our economy and the American public would probably throw a huge temper tantrum.

The real problem, of course, is our out of control spending.

During the past two decades, spending by the federal government has grown 63 percent more rapidly than inflation, and “mandatory” spending on programs such as Social Security, Medicare and Medicaid has actually doubled after you adjust for inflation.

We simply cannot afford to keep spending money like this.

So the best possible environment for “paying down our debt” that we are ever going to see is happening right now.  The only place that interest rates on U.S. government debt have to go is up, and our population is going to just keep getting older and more dependent on government programs.

Meanwhile, our overall debt continues to spiral out of control as well.  According to CNBC, the total amount of debt that Americans owe has reached a staggering 58.7 trillion dollars…

As the nation entered the 1980s, there was comparatively little debt—just about $4.3 trillion. That was only about 1.5 times the size of gross GDP. Then a funny thing happened.

The gap began to widen during the decade, and then became basically parabolic through the ’90s and into the early part of the 21st century.

Though debt took a brief decline in 2009 as the country limped its way out of the financial crisis, it has climbed again and is now, at $58.7 trillion, 3.3 times the size of GDP and about 13 times what it was in 1980, according to data from the Federal Reserve’s St. Louis branch. (The total debt measure is not to be confused with the $18.2 trillion national debt, which is 102 percent of GDP and is a subset of the total figure.)

As I discussed above, there isn’t enough money in our entire system to even pay off a significant chunk of that debt.

Is there any way out other than collapse?