Why Stocks Will Be Going Below Their 2009 Lows

Something absolutely astounding has happened.

Two weeks ago, the head of the Bank of Japan, Haruhiko Kuroda stated that Japan has a “potential growth rate of 0.5% or lower.”

In short, the Bank of Japan has two decades of experience with QE. Indeed, Japan is responsible for the single largest QE program in history, its “Shock and Awe” program launched in April 2014 which equaled over 25% of Japan’s GDP.

Which is why when Kuroda admitted that Japan’s GDP growth “potential” is limited to 0.5% or lower, he was implicitly admitting that QE cannot generate growth.

Remember, Central Bankers speak in half measures. They NEVER admit failure directly. Their primary job is to maintain confidence in the financial system even if it entails lying.

Even more that this, his actions SUPPORT this claim.

Last Friday, the Bank of Japan announced that it would be implementing Negative Interest Rate Policy or NIRP.

This change in policy was incredible. But what’s even more incredible is the fact that the Bank of Japan did NOT increase its QE program when it announced NIRP.

Put another way, the head of the Bank of Japan announced that QE cannot generate GDP growth, and then DIDN’T increase the Bank of Japan’s QE program when it came time to announce a new policy.

In short, Haruhiko Kuroda’s actions are supporting his words.

This is the single most important development in the monetary world. The head of a MAJOR Central Bank announced that QE cannot create economic growth and then refused to increase his bank’s QE program.

As usual, the markets have yet to adjust. Eventually they will. When they do, the S&P 500 will be below its March 2009 lows. 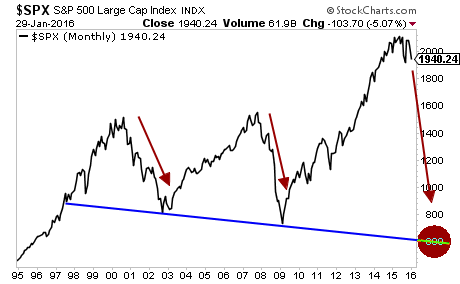 Another Crisis is coming. Smart investors are preparing now.