What Do BRICS’ Exports Tell Us About Their Competitiveness?

At the end of May 2015, the OECD published data on the first quarter’s exports and imports of leading trading nations, including those for BRICS. This data showed that in US dollar terms the total value of each BRICS nation’s exports was falling. Worse, the exports of Brazil, India, Russia, and South Africa have essentially stagnated over the past four years or deteriorated significantly. China’s exports appear to have plateaued at the end of 2014 (see graphic below).

Figure 1: Only China’s exports are now worth more in US dollar terms than four years ago—and even their Q1 2015 data is disturbing.

World trade dynamics offer little comfort to the BRICS either. In their latest report, the respected CPB World Trade Monitor found that the volume and average price of world trade fell in Q1 2015 too. Primary commodities (excluding fuels) fell in price. So did manufactured goods. In fact, the average price of manufactured goods shipped abroad has now fallen back to levels last seen in Q2 2010. While the picture in industrialised countries is one of stagnant rather than falling imports in Q1 2015, currently these markets aren’t a growing source of demand for the exports of the BRICS. However, faltering demand isn’t the only sign that something is awry with competitiveness in the BRICS.

The BRICS have gone to great lengths to artificially stimulate their exports. They have joined the export financing game. Recently, the FT reported that China has quadrupled its export financing to over $400 billion in just five years. (For reference: US export financing lies well below $50 billion).On 12 May 2015 a bill was put before the Russian parliament to expand the support given by Vnesheconombank to exporters. India, by contrast, establishes funds for a specified trading partners which can be drawn down if purchases of Indian products are made. In recent years Brazil has taken 9 steps to bolster export financing.

What is less well known are the steps taken by the BRICS to stimulate their exports through national tax systems. Brazil and India offer tax rebates for exporting. In fact, the Brazilian tax credit (amounting to 3% of the value of goods exported) has been so costly that that country’s finance minister has been trying to rein it in. In May 2014 South Africa expanded its zero-VAT scheme for goods exported by road and rail. In fact the Global Trade Alert team, which I coordinate, has documented more than 75 export subsidies and financial incentives implemented by the BRICS since November 2008.

These incentives harm the interests of trading partners that compete in the same markets abroad, boosting market shares of goods shipped by the BRICS. Foreign subsidiaries operating in the BRICS may be eligible for these state incentives as well—so these incentives cannot be justified as giving a hand to emerging market firms taking on Western rivals.

The latest report from the Global Trade Alert revealed the global reach of these export incentives. Using detailed product and bilateral trade data, the percentage of each nation’s exports that compete in markets—at home and abroad—with a rival from the BRICS whose goods or services are eligible for state inducements was calculated. The results are shown in Map 1. For dozens of countries more than three quarters of their non-commodity exports face subsidised BRICS rivals. 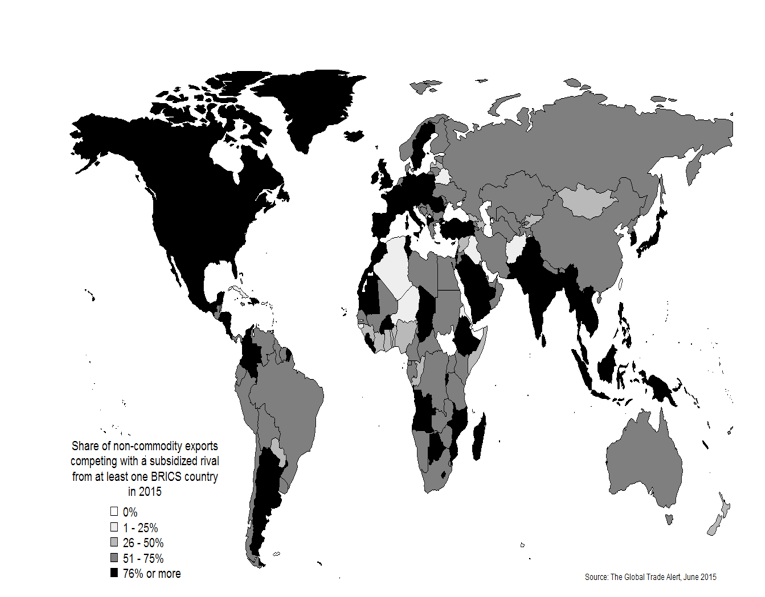 Evidence is also mounting up as to the impact of these state-inducements to export. Scholars at FERDI showed that each percentage point increase in Chinese VAT rebates for exports raised shipments abroad 6.5%. More recently, Johannes Fritz and I found that BRICS export incentives were largely responsible for holding back LDC exports by 31% over the years 2009 to 2013.[9]

Given the scale and likely impact of the raft of BRICS export incentives, the lousy export performance in recent years is all the more striking. If the substantial depreciations of many of the BRICS national currencies over the past years are also taken into account, then analysts may need to revisit their assumptions about the competitiveness of the BRICS.

Simon J. Evenett is Professor of International Trade and Economic Development, University of St. Gallen, Switzerland, and Academic Director of the HSG-MBA.