Two Unknowns: The Fed’s Action, And The Market’s Reaction

The Fed’s Thursday policy decision is clouded by data that justifies both hawkish and dovish stances, leaving uncertainty over whether rates will rise this month. Either way, the response from markets may be more muted than you would think.

This week’s Federal Open Market Committee (FOMC) meeting will no doubt be the most important of Chair Janet Yellen’s tenure at the Fed.

For the first time since the financial crisis, there had been a broad consensus that the Fed could raise rates at this meeting—although the volatility that has emerged in the world economy over the last month has thrown that into question. Now, Thursday’s decision is as close to a true coin flip as you will see in monetary policymaking.

Prior to China’s devaluation of the yuan in early August, which raised doubts over Chinese growth and sent markets across the globe into a panic, the US economy looked to be strong enough for the FOMC to raise interest rates—at least by a de minimis 25 basis points. Along with this came the caveat that the pace of further hikes would be slow and data-dependent. This was a middle road that appeared to appease the majority of the FOMC voting members—raise rates, but keep policy accommodative for the near future anyway.

The rationale for raising rates in September has two main prongs. First, the labor market looks relatively strong. The second can be summarized as ‘why not raise rates and get it out of the way.’

Unemployment fell to 5.1% in August, down nearly 50% from its high in October 2009. Along with it, other measures of labor slack, which Yellen has emphasized as important in decision making, have also made progress. U-6 unemployment, which includes underemployment as well, dropped to 10.3% and has fallen a full percentage point in 2015 (it remains, however, well above pre-recession levels, as seen in the graph below). 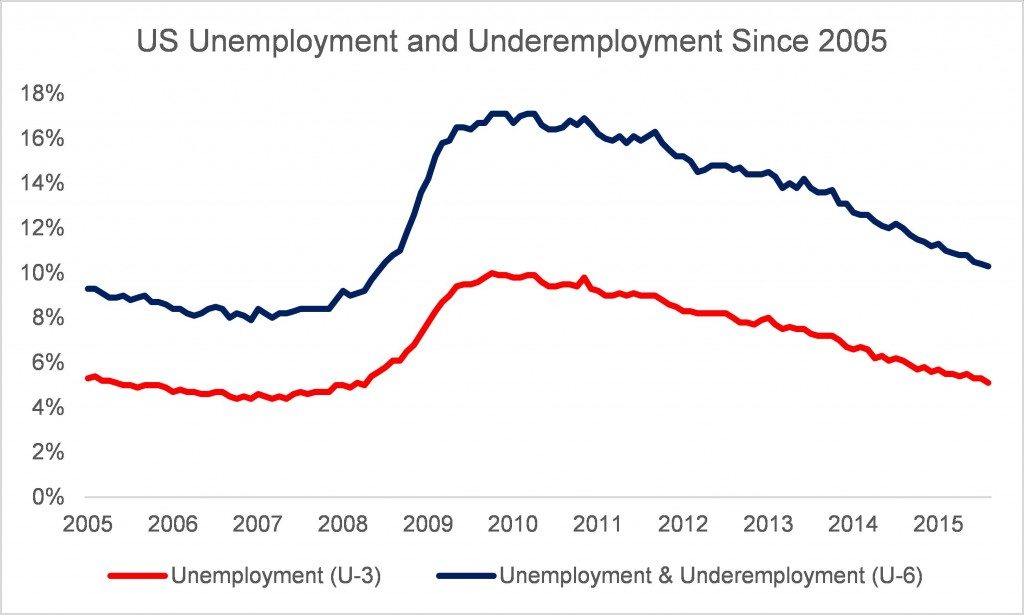 Secondly, those who have worried about low interest rates inflating bubbles in financial markets see it as better to err on the side of raising rates. Unwinding seven years of trades based on extraordinarily cheap financing could put an undue amount of stress on markets. Further, the psychological importance of moving past the first rate hike would allow markets to begin acclimating to a more normal policy environment.

No other Fed official has articulated the case against raising rates now as strongly as Minneapolis Fed President Narayana Kocherlakota, who is not a voting member of the FOMC this year.

As recently as September 8, Kocherlakota laid out the case, which, put simply, is that the risks of making the wrong choice are much greater if the Fed raises rates too early rather than too late. Raise too early and it could choke the economy back into stagnation or even recession. Raise too late, and inflation will be temporarily higher than the 2% target.

More pragmatically, even if the labor market is tightening, the Fed’s other policy goal of 2% inflation has not yet been achieved.

To be clear, the FOMC will not make its rate decisions based on the recent stock market correction or for the benefit of other countries. But the causes of the uncertainty in international markets have become of interest to the FOMC because they may affect the US economy. For example, as the Chinese economy slows and the effects reverberate through commodity and emerging markets, will US exporters see a fall in demand?

The other big question is whether consumers in the US will rein in spending because of the volatility. Even if the US economy is able to shake off international hiccups, perception can quickly become reality. Consumers who become more concerned about the future of the economy will spend less, and suddenly US growth will slow—and it can all happen solely due to expectations.

These worries seem to have played out in Friday’s weaker-than-expected University of Michigan Index of Consumer Sentiment numbers. 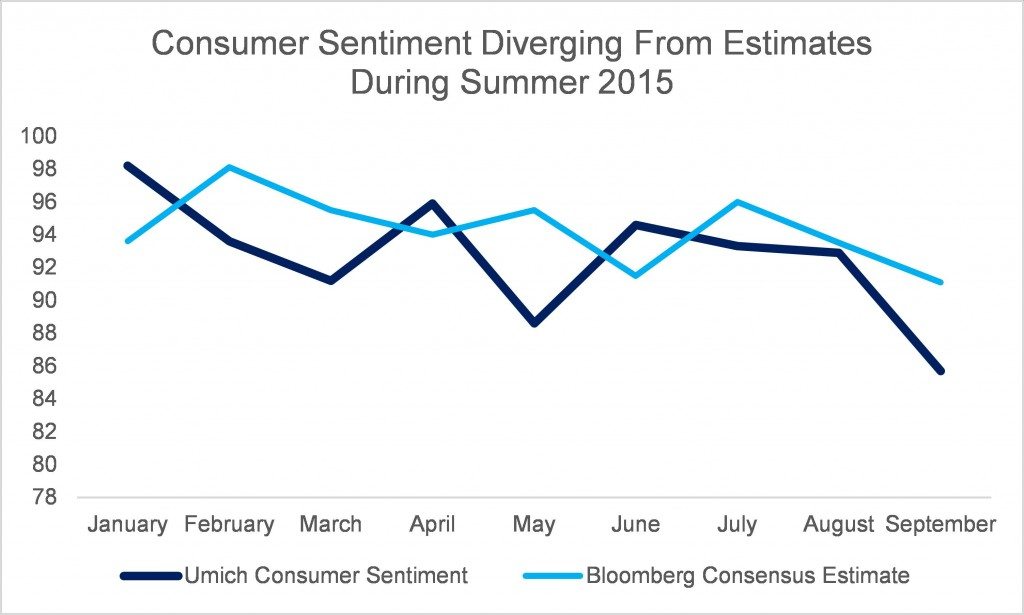 Adding to the case for another month of near-zero interest rates is research from Goldman Sachs last week that the recent financial market volatility has had the impact of three interest rate hikes. Given that one of the arguments for rising rates is to temper overheated markets, this idea will likely be on the FOMC’s radar this week.

Market expectations for a September rate rise have fallen recently due to those international concerns and more dovish than expected FOMC minutes released two weeks ago, but that does not mean that financial markets will recoil if rates do rise this week.

The Yellen Fed has taken steps to convince markets that it is not the first rate hike that matters, but rather the overall pace of rate normalization—trying to remove the psychological importance of the first rate rise. Helped along by the Fed’s repeated insistence that it will be ‘data-dependent,’ markets have begun pricing in a rate rise, to the point that the bigger question is not whether the Fed will raise rates in 2015, but when. This inevitability is a sign that negative reaction to the hikes may be muted. After all, US equities have generally risen during previous rate hike cycles.

There are some natural changes to markets that have and will continue to occur, but the effects will be muddled by a number of unrelated factors. This is particularly true of the bond market, where BlackRock believes factors such as a low supply of high-quality long-term bonds, durational mismatch between the assets and liabilities of major bondholders across the world, and loosening by many of the world’s central banks. Some of these factors, like the drop in supply of bonds, will counteract any dramatic rise in yields that the rate hike could have on long-term bonds.

But each of the impacts of rising rates on fixed income markets will be much more dependent on the pace of the Fed’s overall tightening cycle, not on the first hike. That said, if the Fed does not change rates on Thursday, expect a short-term rally in bond prices and further falling of yields.

As Mohamed El-Erian’s analysis concludes, the odds of a rate hike this week are nearly 50/50—maybe with the ever-so-slightest advantage towards hiking. The logic behind hiking now, however, remains firmly based in the concern that the Fed must carefully unwind seven years of trades in the most complex financial markets, and starting earlier is better.

Alex Christensen is an Editor at Global Risk Insights, who also currently works in investment research. His work on political risk and economic policy has appeared in many forums, including Business Insider, Seeking Alpha, Oilprice.com & The Emerging Market Investors Association. He holds a Master’s in Economics from the London School of Economics and BA from Washington University in St. Louis.

4 thoughts on “Two Unknowns: The Fed’s Action, And The Market’s Reaction”