Setting aside all other considerations and doubts about QQE, there was one factor that was supposed to be unassailable. That was the yen. QQE as a “money printing” operation was understood to act heavily on the exchange value of the Japanese currency so that it would drastically alter the competitive pricing of Japanese goods in Japan’s favor. From that point, the resurrection of Japan Inc. would be all but assured.

The Bank of Japan did manage that feat, as the yen dutifully obeyed perceptions even though bank reserves meant nothing tangible or useful (thus, NIRP). Japan Inc. did not follow.

What did was blanket impoverishment as Japanese companies suddenly found themselves even more interested in offshoring productive capacity. Almost as soon as QQE was implemented, Japan’s once sterling trade balance turned to rot, often at or above a ¥1 trillion deficit in a single month. Those messy days seem relegated to historical oddity, though not for the reasons monetary theory predicted. Instead, both imports and exports are falling now, only imports collapsing much faster. The ongoing recession in Japan has finally cured in trade what the Bank of Japan offered in yen theory. 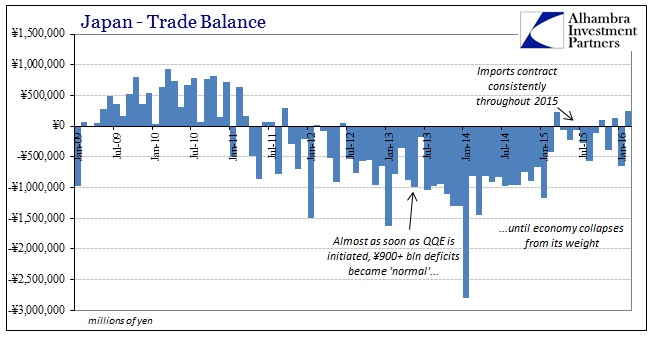 There is a lot to be determined from this one data series, and none of it good for Japan or the rest of the world. February was Japan’s largest trade surplus in more than four years because exports “only” declined 4% (after falling 13% in January) while imports dropped 14.2% (after falling 18% in both December and January). These are China-level import figures that are no longer being affected by the exchange value of the yen, meaning imports match all-too-well the decimation we find in Japanese household spending and income.

That is truly bad news for Asia including China since half of Japan’s imports are derived from its local continent. The Chinese Golden Week Lunar New Year skews the January and February comparisons, but cumulative totals for both months show that imports from China fell an enormous 13% 2015 to 2016. In Asia overall, that comparison was -13.8%, meaning that the rest of Asia received even less “demand” from Japan than China. With Chinese “demand” similarly absent, it is no wonder trade terms all across the Pacific are signaling disaster. 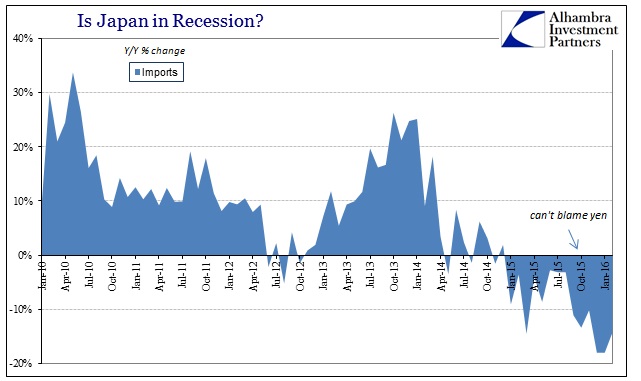 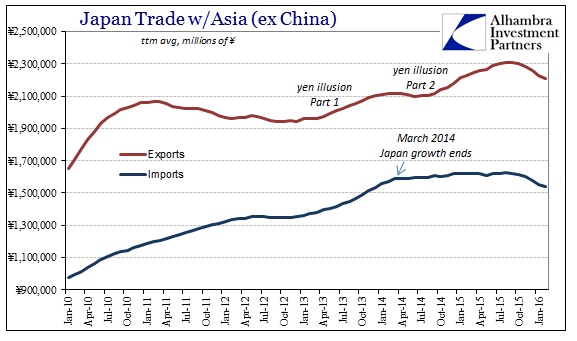 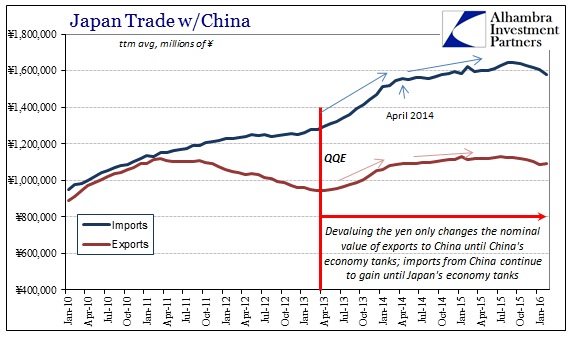 If there is no Japanese demand to aid the rest of the world, Japan finds no global demand with which to balance its domestic collapse. Indeed, despite the constant reassurance that the US is within the closest possible proximity to “overheating”, Japanese exporters, as their Chinese counterparts, strenuously beg to differ. The total nominal value of exports to the US rose just 0.2% in February after falling 5.3% in January and 3.3% in December. Export volume, factoring yen changes, declined 3.2% representing the 10th straight month of volume declines to the US. In other words, despite a weaker yen for some of those months and the continuation of the “best jobs market in decades” Americans for some “unknown” reason were wholly unmoved to buy more Japanese (or Chinese ; or American, for that matter) goods. 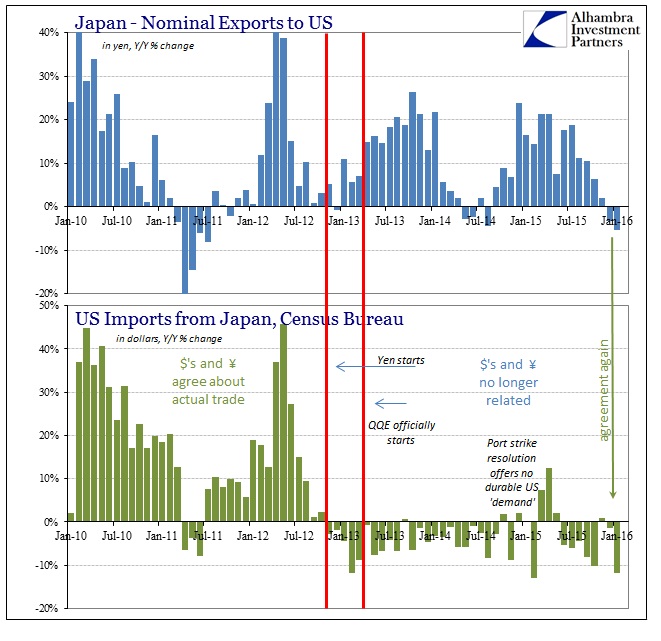 What is left for QQE and now NIRP? Even the economists are worried:

“The tailwind from the weak yen has gone. We can’t help but hold a pessimistic view on the outlook for exports,” said Atsushi Takeda, an economist at Itochu Corp. in Tokyo, said before the figures were released. “Domestic demand won’t be dependable at all, and the same goes for exports. I can’t deny the possibility of another economic contraction this quarter.”
“The lack of a boost from exports raises a risk of Japan’s contraction this quarter,” said Nobuyasu Atago, the chief economist at Okasan Securities Co. and a former Bank of Japan official. “It’s becoming clearer that the weakness of the global economy is taking a toll on Japan’s economy.”

It is not now, nor has it ever been, “stimulus.” Whether or not Japanese GDP contracts again in Q1 is quite beside the point, especially since GDP has been erratic and unstable, at best, for the past two and a half years of monetarism. It does not matter if there were three separate recessions during that time or really just one big, sustained bout of going nowhere; the end result is the same for both classifications and it is very unkind to the Bank of Japan and monetarists. “Weakness of the global economy” is the relevant interpretation and Japan has got it on both sides of its trade ledger where QE, in Japan and everywhere else, was supposed to be.