THIS Could Change If Oil Slides 50% More

Now that brent broke the $80 mark, many are questioning whether a bottom has been reached.  The combination of slowing Chinese demand growth and Saudi’s will to maintain market share make this an unlikely bottom, but it depends more on the supply growth than the slowing demand growth from China.

Kuwait and Saudi Arabia have shown signs they are willing to tolerate lower prices.  If prices continue to drop significantly, there may be not only a pickup in demand but a split where regions that are less heavily reliant on exports like in Africa and Asia may accelerate compared with a more pronounced slowdown from areas like S. America that depend on oil exports for their demand growth. The IEA predicts an acceleration of up to 2.6%, up 800 kb/d, led by Asia, Africa and the Middle East that will overpower slower growth from sanctions-hit Russia.

While oil would need to drop below $40 to seriously hinder US production, it only needs to hit below $70 to impact weaker marginal oil producing countries Brazil and like Russia – or even put OPEC into a panic.  I was asked if this could happen in a Sky interview, and it is possible oil could slide another 50%.

In a NYT Op-Ed, it was pointed out from a prior article that “there is a precedent [for] such joint action that caused the collapse of the U.S.S.R. In 1985, the Kingdom dramatically increased oil production from 2 million to 10 million barrels per day, dropping the price from $32 to $10 per barrel. [The] U.S.S.R. began selling some batches at an even lower price, about $6 per barrel. Saudi Arabia [did not lose] anything, because when prices fell by 3.5 times [Saudi] production increased fivefold. The planned economy of the Soviet Union was not able to cope with falling export revenues, and this was one of the reasons for the collapse of the U.S.S.R.”

However, the slide in oil prices may stimulate the economy. In a separate Reuters interview, I was asked whether we might see gas below $2 since that may help stimulate the economy driven by the retail consumer.  We would probably need to see oil slide another 50% in order for this to happen, given the last time gas prices were that low was in 2009, post the financial crisis. (See in the chart below).  That could happen if Saudi really wants to destroy other oil producers in spite of itself, just like it cut prices by more than half in the 80’s. 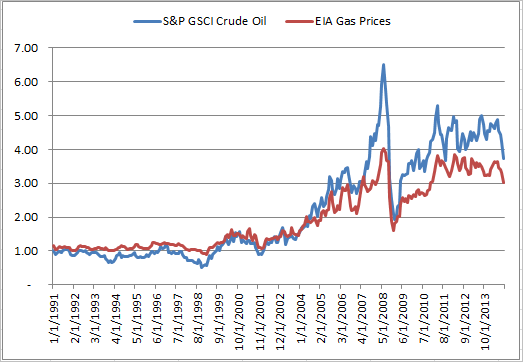 The posts on this blog are opinions, not advice.

This material is reproduced with the prior written consent of SPDJI. For more information on SPDJI, visit http://www.spdji.com